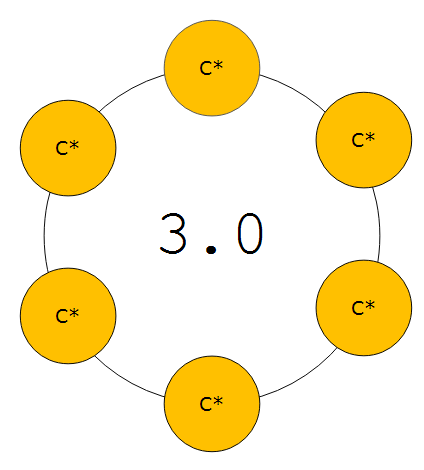 Apache Cassandra version 3.0 was released in September 2015. With the 3.0 release, some major updates to the storage engine and (long awaited) materialized views were introduced. For a Data Modeler, the addition of views are something to jump up and down about. However, over the last half year or so, many companies have been hesitant to make the jump from their trusted 2.1.x version. By the end of this post, I hope to help you understand:

There are a lot of new features that were included in Cassandra 3.0. The most notable was a major storage engine rewrite and the addition of materialized views.

The storage engine is what implements the read/write path of data. This is the piece of code that interacts with SSTables that your data is stored in. The original storage engine that Cassandra used was based off a legacy structure that wrote data out as cells. With the introduction of CQL, the storage engine was always acting as a translation layer between CQL and CLI, the legacy syntax. This translation led to constant inefficiencies in memory and garbage collection usage.

Many of us will remember using Views in our relational database days. The idea that data could be organized into different layouts for easier retrieval without having to specifically write it that way. Of course, the idea of a view in Cassandra doesn’t correlate perfectly to a RDBMS, but the concept is intact. In Cassandra, creating a materialized view actually creates a new table based off of an existing table. When you write data to the original table, the data automatically flows to the new table. Now you can retrieve data from either the original table or the view’s table.

Why should I upgrade?

Simple, it increases your read/write speed & potentially will reduce your application code.

It’s faster. Since the storage engine doesn’t have to be backwards compatible with CLI, it allows reads/writes to flow much faster to/from disk. Not only is the read/write path faster, but it’s more efficient with using your machine’s resources. Reads are no longer having to read into memory more data than necessary just to organize it for translation. That leads to more memory being left available to be used for your row/key cache. Writes are no longer having to be reorganized between network to disk. That leads to freed up cycles for garbage collection. Your infrastructure engineer will thank you.

It’s reduces code. Before the introduction of views, if you wanted to search the same data using similar but different keys, then you had to explicitly write that data twice. This means that when you changed the data in one of the tables, you had to make sure that you kept the other table(s) in sync. The responsibility of this was on your application developer. Now with views, you only have to write to the original table. All the new data, and later updates, will automatically flow to the view table(s). Your application developer will thank you.

Think of how much faster your Cassandra cluster will respond. Think of all of the lines of application code that can be removed. Think of all the round trips to the database that your application doesn’t have to make. Upgrade to 3.0, it’s a no-brainer.

How does 3.0 affect my data model?

Materialized views are your new best friend. Imagine a data model that has you storing a customer’s address and you need to retrieve all customers by their customer_id and also by state and by city and by street name. In versions of Cassandra previous to 3.0, you would need to create the customer_address table and then 3 additional tables (customer_address_by_state, customer_address_by_city, & customer_address_by_street) to satisfy all of the search requirements. That’s four inserts for every new address that is created. And every time John Doe moves and you have to update their address, that’s four updates that you have to coordinate. Or deleting an address, that’s four deletes you’re executing. That’s quite a bit of client-side overhead for what should be a very simple data model.

With the release of Cassandra 3.0, the same scenario has you only creating a single table and three materialized views. Now when you insert a new address, it’s only for the customer_address table. Any of the data in the views are kept in sync on the server-side. Your client doesn’t have to worry about any of it. If the address is updated or deleted, the data just flows to the views. It’s all done on the Cassandra node, not a single line of code is needed on the client. That’s money in the bank. Every time your application developer has to refactor code around that the customer_address table, it’s only one spot, not four, that needs to be altered.